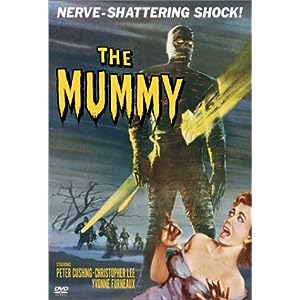 After successfully reworking Universal’s Frankenstein and Dracula pictures into The Curse of Frankenstein and Horror of Dracula, Hammer Productions decided to again turn to another Universal monster for box-office hit. I can’t blame them as if a formula works then don’t fix it. This time it was The Mummy and it reteamed stars Peter Cushing and Christopher Lee with director Terence Fischer

Despite the title this is not a remake/reworking of the original Universal film. The story is actually a reworking of that film’s sequels The Mummy’s Hand and The Mummy’s Tomb. Despite those films mostly being B-movie drivel, one good aspect comes from this reworking…more shambling mummy action! Universal’s original Mummy only had Boris Karloff on screen in his full bandaged mummy form for a few moments. Not here as we get Christopher Lee shambling around killing as the mummy for almost the entire film.

When a British expedition uncovers the tomb of an Egyptian princess, they awaken the mummy of her lover and high priest who in turns seeks revenge! Like in the Universal film The Mummy’s Tomb, the mummy gets transported to England to hunt down the members.

Peter Cushing is great as always and so is Christopher Lee despite the fact that his face is covered up for almost the entire film. The production values are as usual very good (some of the Egyptian sets do look a little fake though). I however wasn’t that aw struck by the make-up work for the Mummy. This image of the mummy comes nowhere near any of the original Universal films.

Like Universal’s original Mummy this film isn’t quite as good as Hammer’s first two horror hits The Curse of Frankenstein and Horror of Dracula. It’s still a grand Hammer feature and a classic of the genre. Like Hammer's Dracula and Frankenstein films The Mummy inspired it's own series of sequels, just not as many. The Curse of the Mummy's Tomb, The Mummy's Shroud and Blood from the Mummy's Tomb would follow (the last film not even featuring a "bandaged" mummy)

Written By: Eric Reifschneider
Posted by DarkReif at 7:39 AM